Learning about Stars and My A-Type Personality

I recently posted on Facebook, “You might be an A-Type personality if your personal happy space is exercising and taking a course for college credit.”  That status stemmed from the realization that sitting in Astronomy class, learning, is my personal happy space. That fact that my grade slipping to 97% motivated me to sign up for extra credit confirmed that I am indeed an A-Type personality. Our extra credit assignment requires us to reflect on our experience, so here I go…

Outline the life of a low mass star like the Sun. Specifically…Explain the transition from main sequence to red giant. Specifically, explain what happens in the core and in the outer layers and why these changes occur.

I selected this outcome because I consistently failed to understand the sequence of changes and kept incorrectly answering questions concerning the life of low-mass stars. I really just wanted the practice in “getting it right,” and I think completing the extra credit  helped. My original frustration stemmed from my inability to remember whether the core of the star shrank and then the outer layers swelled or vice versa. My project involved creating a Thinglink, essentially an interactive picture about my topic. 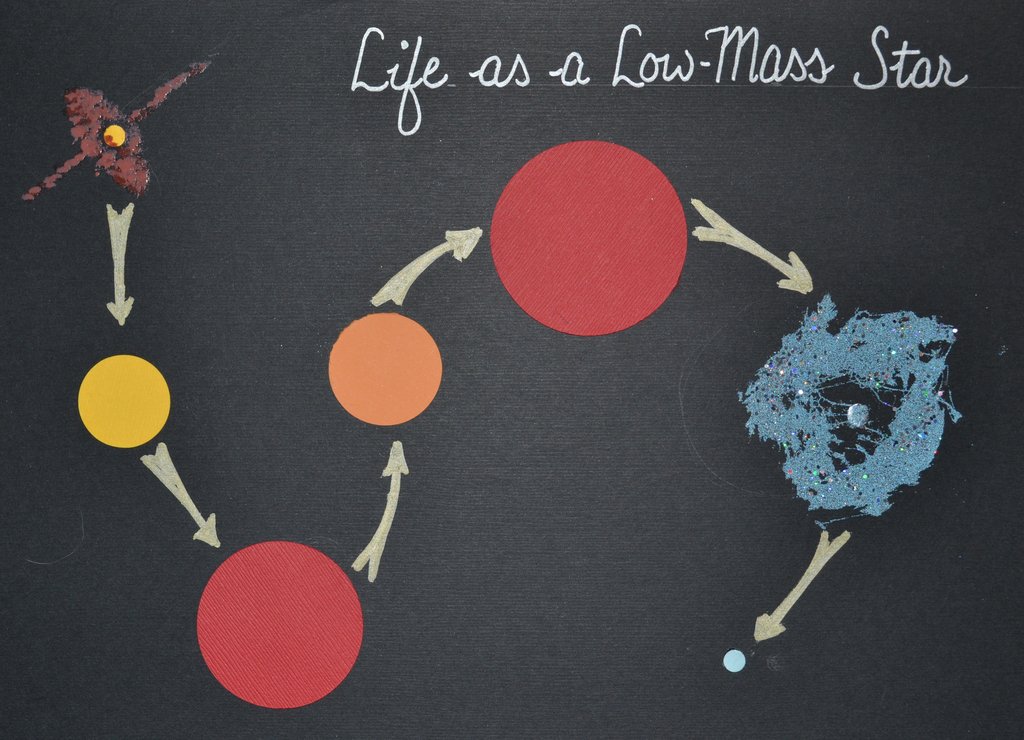 In addition to reviewing my textbook several times, the very nature of the project helped me to learn that the core shrinks and then the star swells because gravity can no longer tightly pull in the star’s outer layers. Because I was on the internet looking at Open Educational Resources and science-related websites for pictures and illustrations to add to my project, I finally understood why. I found a couple sites that included the equation for the force of gravity along with the explanation of red giant stars. That’s when it finally sunk in why the star “expels” its outer layers, leaving the core behind. Once I recognized that the distance between the two parts was increased while the mass of the core had decreased, weakening the pull of gravity between them, I could remember the sequence of events.

What’s really amazing to me about this is that math came to my rescue. I would never have figured that understanding the math behind a concept would help me understand the concept itself. Heck, until recently, I never would have said that I could even understand the math.

Also, I think looking at the concepts in terms of teaching them to an audience really helped. I took the technique of creating a Life Map–a prewriting exercise I sometimes use with my writing students–and turned it into a presentation about a star’s life and death. I did my typical crafty thing of searching for supplies and finally chose colored paper as well as my paper cutters and punches to create the map. Using glitter to create a planetary nebula was an easy choice, but it took me a long time to decide how to make a protoplanetary disk that would show up on black paper and “look right.” Finally, I decided to try fingernail polish. With two different shades and one tiny piece of yellow paper, I managed to create something I was happy with. (Yeah for problem-solving skills!)

After I posted an early draft on Facebook, I realized I should have said somewhere on the picture “Images not to scale.” That realization not only recognizes that poor planning led to my protoplanetary disk being much too small, it also indicates that I understand the relative sizes of the objects I am trying to describe and the difficulty in actually representing them. (Yeah for learning!)

This entry was posted in lesliecjohnson. Bookmark the permalink.